Safeway Design For Rockridge is Terrible; Out of Scale With Surroundings 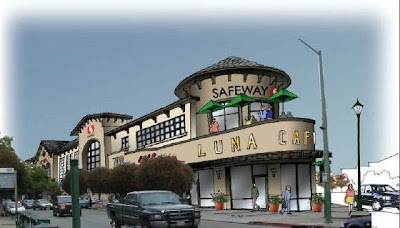 One good thing about being around here for awhile with an active memory is history. I remember when Dreyer's Ice Cream proposed its giant facility for Rockridge, and many, including for a time me, were against it. One reason for this was that the original plan called for a visible College Avenue presence that was just too out of scale with the neighborhood. I say that's true for the Safeway proposal before us.

This is one of those stories that needs a video and one will be up soon, but for the present, what's neat about Rockridge is that there's not one long wall of building walls hugging the street. It's a parade of structures of varied heights, allowing Sun to reach the street and giving a small-town-in-Oakland feel.

But Safeway's current proposal will destroy that feeling in my view. It calls for a building that does what's not cool: hugs the street and looms over it. It would drastically alter Rockridge and make it seem more like a retail downtown suburb in Oakland with constant traffic problems.

Unknown said…
I don't understand the opposition to this project. A two-story building is not out of scale in a commercial district with mostly two-story buildings, and bringing the building up to the sidewalk is more in character with the existing neighborhood than the suburban style parking lot that's there now. It's a grocery store that wants to upgrade instead of leaving town!
1:13 PM

Zennie said…
Steve, you don't live in Oakland or Rockridge. You live in Washington DC. The "grocery store" has many chains in Oakland. Rockridge itself is slowly becoming what many don't want it to be: another downtown.

The Safeway proposal will move the store into Rockridge and away from the Berkeley boarder, bringing the traffic problems with it along a smaller street that is College Avenue.
12:39 PM

Unknown said…
Huh? I live in Oakland, in Adam's Point, to be exact. This project isn't moving the store anywhere, except to the other end of the parking lot, and will probably improve traffic flow since cars won't be turning out onto College from the parking lot the way they do now.
2:49 PM

Zennie said…
There's a person in DC who linked to this post and made similar comments -- almost spot on -- so I stand corrected. The problem was that your take was so general it could have come from anyone, anywhere.

Safeway's not leaving Oakland. Not in any way. So that is why I confused you for him; you stated they were -- or could -- leave.
5:15 AM

ShopGirl said…
It's funny to me that other neighborhoods would LOVE to have a grocery store, while areas like Rockridge want Safeway to go away.

But as to considering Rockridge "another downtown" - it is already in my mind. I go there all the time. I get a few things at Market Hall, have a snack at Oliveto when I can afford it, and then get canned goods at Safeway. It makes for an easy one-stop shopping experience.

But I can understand not wanting it... you already have so much good stuff in Rockridge (Wood Tavern!) that you don't need an upgraded grocery store.
11:15 AM

SFArts said…
There are also many other grocery options in the neighborhood - not only the pricey Market Hall, but Trader Joe's and Yasai Market right across the street from the proposed Safeway. I live 4 doors away and I truly believe this huge mall will change the quality of my life. It will be monolithic and overpower the shops elsewhere in the neighborhood. There will be more traffic, the EIR calls for a ludicrous 5 traffic lights within 3 blocks.

Add to that, I live just over the border in Berkeley so I feel that a different city is shoving this down my throat.
7:02 PM