Oaklandish Hosts Salsa By The Lake

On Sunday, I was headed to the Parkway Theater Community Meeting when I noticed this group of 40 people Salsa dancing in the Splash Pad Park in front of the Grand Lake Theater and near Lake Merritt here in Oakland. So I talked to Imogine of Oaklandish who was one of the producers of the event called "Salsa By The Lake".

She said they normally they normally hold the event under the greek columns at the Lake, but construction prevented them from holding their normal dance gathering so they moved to the park in front of the Grand Lake Theater. The result was a blast of a gathering!

I have to say it was just plain fun and by 5 PM the gathering grew to about 400 people dancing and in some cases just watching. And I was one of them. Truth be told, my Salsa skills need work, but I can move my hips all day and guide my partner to a fair degree. A friend saw me, came over from behind, and said "You're dancing" and it wasn't a question, it was a demand; besides, who can refuse Rose? So we danced!

As I told Imogine that location should be the standard area of the event. That was a great social gathering in Oakland. It could be as popular in its way as the Oakland Farmers Market is for food shoppers on Saturdays. Indeed, with the theater next door, we could see the formation of an organic indoor-outdoor entertainment nexus for the recession age; dancing is free!

Oaklandish, to me, has always been this funky group of hippy-types that wore Oakland-relevant t-shirts. Founded in 2000, It's a mix of The Greatful Dead and The Oakland Chamber of Commerce with a little love child action thrown in. While that's not far from the truth, the real story of Oaklandish is a serious business and social effort that promotes the history of Oakland, has grant programs for Oakland-based artists, and frankly does more to promote Oakland than the chamber does, with its silver bus called "The Mobile Ops rig" which appears around the city and at the Grand Lake and Temescal farmers markets. 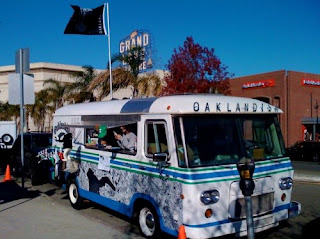 The Oaklandish MobleOps Bus
Oaklandish has the "Innovators Award" and the "Arts in Action" grant. The Innovators Award is described as "a fund that offers annual grants to those organizations and individuals who are doing pioneering work in our community" and totals $25,000 is award size. The winners this year were: Kung Fu Grocery, Bay Area Girls Rock Camp, Town Camp, Cycles of Change, Just Cause Oakland, Youth Sprit Artworks, and Scraper Bikes. The Arts in Action grant supports work that has Oakland as its subject. This year's winner was Favianna Rodriguez.

Regardless of style differences, the Oakland Chamber should work with Oaklandish on a regular basis; it would put some much needed soul into what is in my view a staid business group in dire need of a 21st Century shot in the arm.

For more information on Oaklandish and its programs and services, visit Oaklandish.com