Mary and some of her colleagues in the 40s
As I write this I'm sitting here watching the funeral for Senator Ted Kennedy and preparing myself to attend the memorial service for Mary Morris Lawrence.

This is a hard day. To start, it's a day that marks the passing of two incredible people; one I never got to personally know, the other I did personally know. Both changed the society they were in.

It's hard for me to accept the passing of Mary because her spirit was so powerful I can't see her as anything but here and alive. I suppose that's why it took me so long to write anything about this moment. Aside from the fact that this has been my sixth memorial or funeral this year, it's just something that's plain hard to acknowledge.

Mary was America's first female photojournalist, and one who knew many, from Orson Wells to Humphrey Bogart. But to me, Mary was always the bright buzzing light in the room that could make one statement which cut through all of life's crap and got to the point: "Zennie. I want to talk to you about that ridiculous column you wrote," she's loudly say at some gathering. 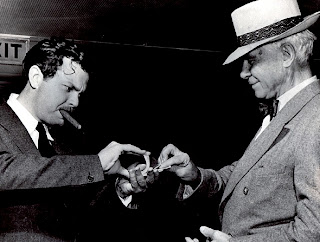 Orson Wells and Carl Sanburg (Mary Morris Lawrence)
At the time from 1993 to 1996 I was a columnist for The Montclarion here in Oakland, and like today, I weighed in with my opinions on Oakland, politics, news, and sports (tech came later). Mary read my work and kept me in check, and I loved every second of it.

Mary was hard to miss. You felt her presence in the room. For me, she was the closest thing to royalty in Oakland.
Mary Morris Lawrence Ted Kennedy