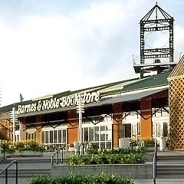 According to Sanjiv Handa of the East Bay News Service the enormous Oakland Barnes and Noble bookstore at 98 Broadway in Jack London Square may close Jan. 31, 2010. Barnes and Noble is expected to make an official disclosure next week, baring any intervention from the City of Oakland to persuade them to remain open.

Sanjiv Handa reports that the anticipated closure will cost the City of Oakland's government $125,000 in annual general fund revenue. (He forgot the additional revenue from the predatory parking ticket policy, but admits its harder to quantify.)

The closure of Barnes and Noble is a blow to Oakland but the problem of its low profitability comes as no surprise. Chain bookstores around the Bay Area and around America have closed under the weight of the transition to online sources for news and information and the growth of online booksellers like Amazon.com.

This would not leave Oakland without a bookstore.  The popular  independent bookseller Walden Pond Books on 3316 Grand Avenue is still open; no reports of a planned closure.   Just keep the Oakand parking attendants from chasing the customers away and it will do fine.

But that aside, the loss of Barnes and Noble would be a blow to the image of Jack London Square as the space the bookstore occupies is so large that it is an major anchor tenant there. What will the Port of Oakland do to replace them?