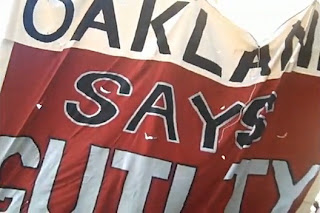 Oakland, California is now what it hates most: the center of attention in America for a reason it does not want: the Oscar Grant verdict.

Former BART Police Officer Johannes Mehserle was found guilty of involuntary manslaughter and not 2nd degree murder, or 1st degree murder as many had desired.

The announcement of the ruling had many looking for Oakland to erupt in a wave of violence and property damage that didn't happen while the Sun was up.

These three videos below show the giant, peaceful protest, which started on the corner of 14th and Broadway and with one-fifth of its ranks being members of the media, and was moved into the middle of 14th and Broadway. The result was the largest peaceful, traffic-stopping protest ever held in downtown Oakland.

This first video shows what happened just before the street protest:

The second video is from the middle of the protest at 14th and Broadway:

The third video features a the dramatic raising of an enormous flag on the street pole at the Northeast corner of 14th and Broadway that reads "Oakland Says Guilty."

The general view shared was many were proud of Oakland for having a protest without violence. That was until the Oakland Police and The California Highway Patrol got antsy and decided to do something.

That something was to move in and essentially work to compress the crowd, with predictably ugly results. This blogger went to upload the first set of videos, which is why that chaos is not represented in the videos you will see. And with that, what happened was not on the scale of 2009. The question many are asking is why did the police take violent action when it wasn't necessary?

As I write this, I'm in a new bar called Geisha about three blocks away from 14th and Broadway.